I met Rachel at London Kings Cross after an uneventful train journey previously – just catching up on my GBBO. I also bumped into Pippa Archer which was lovely to have a chat before I hopped on the train at the first class section – AS I HAD FIRST CLASS WOOWOO. I was super excited, booked my train early enough to make it viable to pay the extra £10 for 1st class. Managed to bag some vodka and eat my heart’s content of cake, tea & sausage rolls before trekking through the coaches to C where Rachel was. 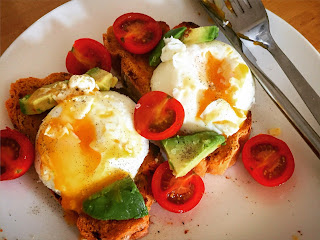 We arrived in Edinburgh at 22:08 where Florence was to pick us up and drive us back to the flat. We had a quick catch up, not having seen each other in over a year and even then not really getting a good conversation. The following morning I was up early to do intervals, convincing Florence to come with me, we jogged to the Meadows and did a session sent by Mick the evening before. I was wary of my ankle which had been playing up in the past couple of days but I ran on the grass to minimize the impact. Breakfast was yummy – poached eggs, avocado & tomatoes on toast – before we all went into Edinburgh as it Rachel’s first time there! We walked along the royal mile & popped into a fudge shop which Adam had previously brought me stacks of fudge from! We had some tasters before carrying on up to the castle which unfortunately had lots of scaffolding around form the Fringe Festival which ended the week before. We continued to GrassMarket where Rachel tried her first macaroon, picked up some postcards and headed to the National Museum for some good views at the top. We were all pretty tired, stumbling up the stairs to get to the top – we got the lift on the way back where Rachel nearly cracked her teeth on a stone in her cereal bar! We picked up some groceries (aka biscuits) before heading home for a much needed cuppa. We put on Ghost of a GFs Past – complete waste of a few hours, even though I did embarrassingly well-up at one part of it :O. 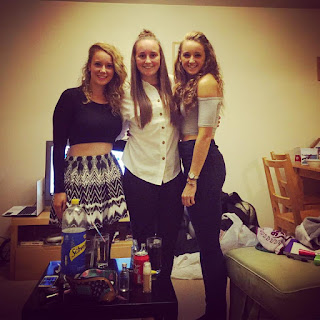 In the evening Rachel & I went to the gym where Florence works to do some core and back exercises. We had fajetas for dinner before getting ready to go out as I hadn’t been out in ages and was feeling like an old lady! We went to a couple of pubs before hitting McDonalds and then making it out to the clubs – although I was drinking I didn’t binge drink so I was happy and didn’t feel like shit the next day :) Rach & I got some chips coming back slightly earlier than Florence before we all hit the sack. The following morning I dragged myself up for a long run on Black Friars & Braids Hill which was enjoyable as the weather was gorgeous. I overshot a bit so ran on the road for a while but my ankle held up. I got a bit confused with a gold course, getting trapped on all the greens surrounded by thickets so it took me a while to get off and I was thankful to then finally be heading back! Rachel & Florence were watching Bounty Hunter when I got in so I ate before we went for a walk around Arthurs Seat. It was a stunning day and we stopped a few times for photos and gossip. 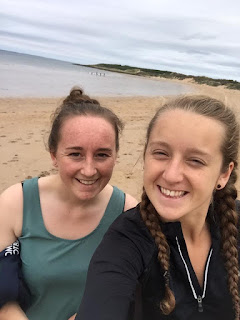 Aterwards Florence powered on to the gym whilst Rach & I ‘stretched’ soaking up the sun. We had booked to eat out so at six made our way to GreenMantle Pub, watched the end of the England game (England vs Slovakia World Cup which we won in the las tplay of extra time – although probably shouln’dt have) and had burgers. I had the goats cheese, bacon & onion rings burger which was gorgeous! So we didn’t have to buy desert we went to the shop to pick up some goodies to eat whilst watching The Man from U.N.C.L.E.


Monday morning I crept out for an early easy run on Arthur’s seat which was hilly and I got grumbly and frustrated with my speed and the hills, not finding the paths that I wanted to so ended up running up the top of the Salisbury Crags. It was Rachel’s last morning so we squeezed in a quick gym session before dropping her off at the station. Florence & I continued on to Gullane and the beach where we had a walk around. On the way back we stopped off at S.LUCA for ice cream (& pancakes) in Musselborough. Back in the flat I helped Florence with her CV to get her a new job with nicer hours (that don’t start at 5am!!) and made some soup – during which breaking a knife and splattering soup everywhere. We ate it whilst watching Lucy and then off to bed before the long journey home the next day (only £22 to get back home though!!)
Posted by Unknown at 11:37