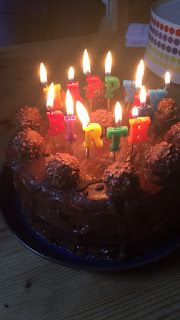 So BUCS orienteering again was on my birthday weekend. Even though I wasn’t at university anymore the competition was a selection race for the World University Orienteering Championships. Unfortunately as I was a guest it meant an early start so I travelled up in the morning, picking up Harry’s friend in Lydney. After the initial buzz of seeing everyone I needed to make a decision on whether to run – for the two weeks previous I had been struggling with a stress reaction. Although there was no pain when walking I hadn’t run since the a session on the track which resulted in achy pain around my ankle and a very sharp pain when pressing the bone L As I have been building the volume up, mostly on tarmac or hard surfaces, since January it wasn’t much of a surprise.

I made the decision to run helped by Adam and a text from Mum which basically said, ‘You only live once…go get it’. I jogged cautiously to the start over analysing any feeling in my ankle and surprisingly I felt pretty good J Starting at the same time as Dave meant I could have a joke before my start. In my brain I was still trying to work on getting to each control perfectly – actually reading the map and using the information there. I remember when I was younger and use to tell myself there was absolutely NO REASON AT ALL why anyone should EVER make a mistake as you have everything you need to get around the course perfectly. I mean the map tells you EXACTLY where to go you just need to use it! So for this year I am really looking to get my confidence back by making no mistakes before I begin to be cocky and start running faster! 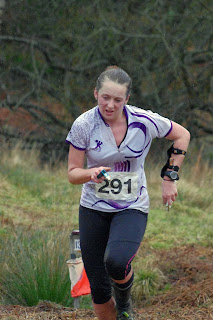 The course was well planned and I loved the forest as it was runnable. I was happy with the first few controls before being an indecisive headless chicken with a route choice of straight and contouring or uphill but then beasting it on the path. I ended up doing a bit of both which lost me more time I thought! For the rest of the course, I was able to build my confidence on each leg as I made good route choices, executed them well and enjoyed finding each control. At control six I turned out of the feature after punching to see Jo Shepard chasing my tail – after the initial: ‘What the hell, I thought I was doing really well!???’ I realised she was a speed demon and I simply couldn’t keep up. The rest of the course was spent trying to focus on my orienteering whilst not letting JO get too far ahead – although WAY faster than me an occasional mistake meant we kept meeting at controls. After the spectator control I could feel my ankle brewing and had a moment to think if I should carry on, followed by: ‘No, stop being a pussy – just because Jo has caught you up!’. 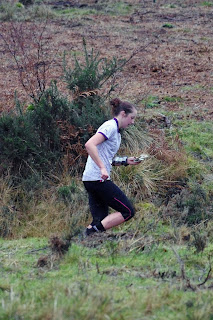 The end of the course I was flagging majorly, hanging on to any energy with all navigation thrown out the window I was simply running (if you could call it that!) in the vague direction and waiting until I was closer to the control feature to see if I had to navigate more (hoping instead the control would simply jump out and wave at me :’)). At the finish I was really really pleased with myself for not making a big fuck up and also enjoying it! I had a lot of respect for Jo as I’d seen her in the forest – to be honest if I hadn’t seen her but come back to her time (4 minutes faster than mine!) I would have been pretty moody questioning if a good run for me was actually a good run!! Stupid I know. At least I am aware of these competitive mood swings which is the first stage to tackling them right? 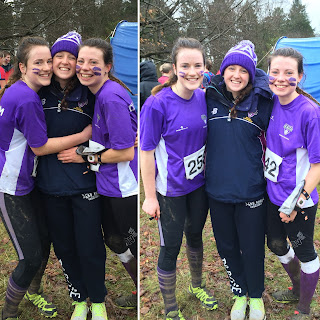 I iced my ankle (although it was already cold enough from the wet terrain!) and waited for my favs to come in. Adam finished complaining about his mistakes but I was really happy for him as his runs are getting more consistent (and the week previously he even beat me to about a third of the controls :O). Need to watch my back now. Once Aine and Mariama finished we snuck off to Bristol to have showers and chill out at a café before getting ready for the night out.

As I’m an old lady with a job now I took advantage of a night out and covered my face in facepaint to be Tigger from Winnie the Poo. The meal at Cosmos was (by far) the best BUCS meal I’d ever been too and we all happily stuffed our faces before the night out. As it was birthday the following day I stayed out until midnight before going back to the freezing hall to find Harry lying face down with no blanket or sleeping bag on the thinnest rug ever L I gave him a blanket and pillow before trying to get some sleep myself. I wasn’t expecting a great sleep so wasn’t surprised after waking up to drunkards walking in throughout the night and random noises from people’s beds :P. 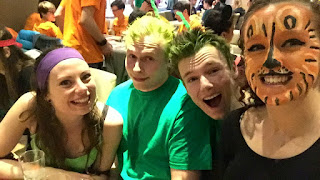 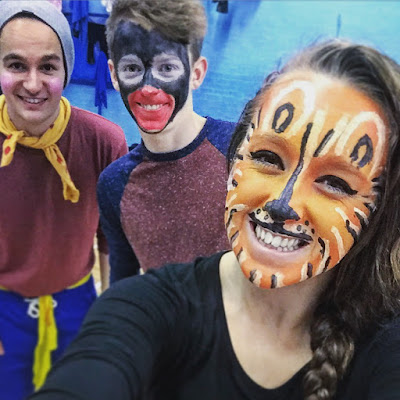 The next morning when everyone went off to the relay I drove home to the family to spend my birthday with them. Whilst they all went orienteering I had a bath to relax. For lunch we went to a pub in Breamore which provided crocodile & ostrich meat! It was a great birthday and Mum made the best cake I’ve ever had. We also turned back into five year olds with the helium balloons :’). 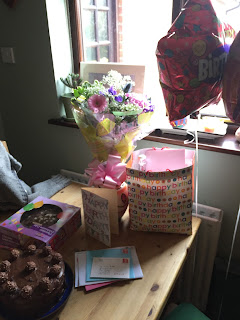