On Friday I left Durham ,starting a six and a half hour journey up past Edinburgh (where we stopped for pasta at Zoe's, picking both Zoe and Charlotte up) and on towards Ballater where we were staying in this hostel type accommodation where me and Zoe managed to get a room for eight to ourselves :) 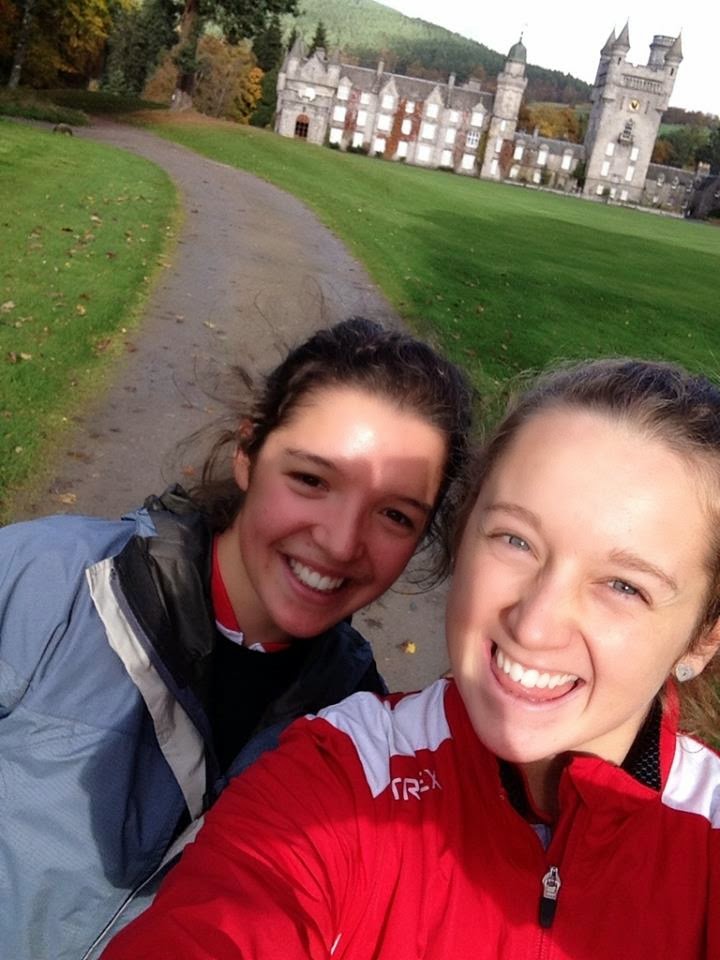 Although there was lots of heavy rain in night, I slept well; I stuffed my face with crunchy nut cornflakes in the morning and headed off to the event which was located right next to Balmoral Castle! In The Queens grounds!! Me and Zoe had a cheeky selfie with the castle before running off to the start. Although the first two controls took us straight uphill my legs just about coped and for the first half of the course I felt good, strong in the terrain (even though there was heather, moss and stones to throw you off line) and my navigation was holding up well. A few slow uphill legs and a route choice mistake saw the lead I'd conjured up quickly slip away but I still felt good having caught up some fellow orienteers.

Then I decided to cross this river - I'd looked at the leg earlier and with the scale of 1:10000 the route on the path round looked too far, so I'd already planned to cross it. However when I got to the river - which was deep, fast flowing and spotted with large boulders - my sense of self preservation disappeared and I stubbornly tried to cross the river. I tried in two places thinking: "No way can I cross it here", when losing my footing a few times and feeling the current against my legs. So I tried a little further up where I saw some rocks that I could wade between. Wading turned into controlled (ish) falling/being swept by the current from rock to rock; at one point I was sat on a rock in the middle realising this was a stupid idea. I was almost at the far side when I got caught in the current and swept down stream a little bit. I WAS SO SCARED. Grabbing a tree I pulled myself out and tried to continue on the course, shouting at myself with glee that I was still alive and CONQUERED THE RIVER.

My legs however seemed to have frozen up and with the next leg up hill, my top now weighing an extra stone with the water it soaked up I took a while to get going. The last five controls were okay, not as smooth as the first half, knowing I'd lost time in my near death experience.

Finishing in the lead, the time in 1st was short lived when Zoe came storming in to the lead, by two and a half minutes. Although annoyed with myself, the English girls had got 1st and 2nd which was great for the overall competition; although there wasn't as much success across the other age categories and after the individuals day England were second behind Scotland by four points. Wales and Ireland were on equal points which was setting the relay to be all to play for.

That evening there was another ceilidh but before we had A FEAST. No joke - an actual feast. Normally orienteers just want vast quantities of food, and aren't as fussed with quality but that evening we were waited on with silver service and treated to a hugeeeee hog roast and a gorgeous dessert before coffee and fudge all within the grounds of Balmoral castle!! 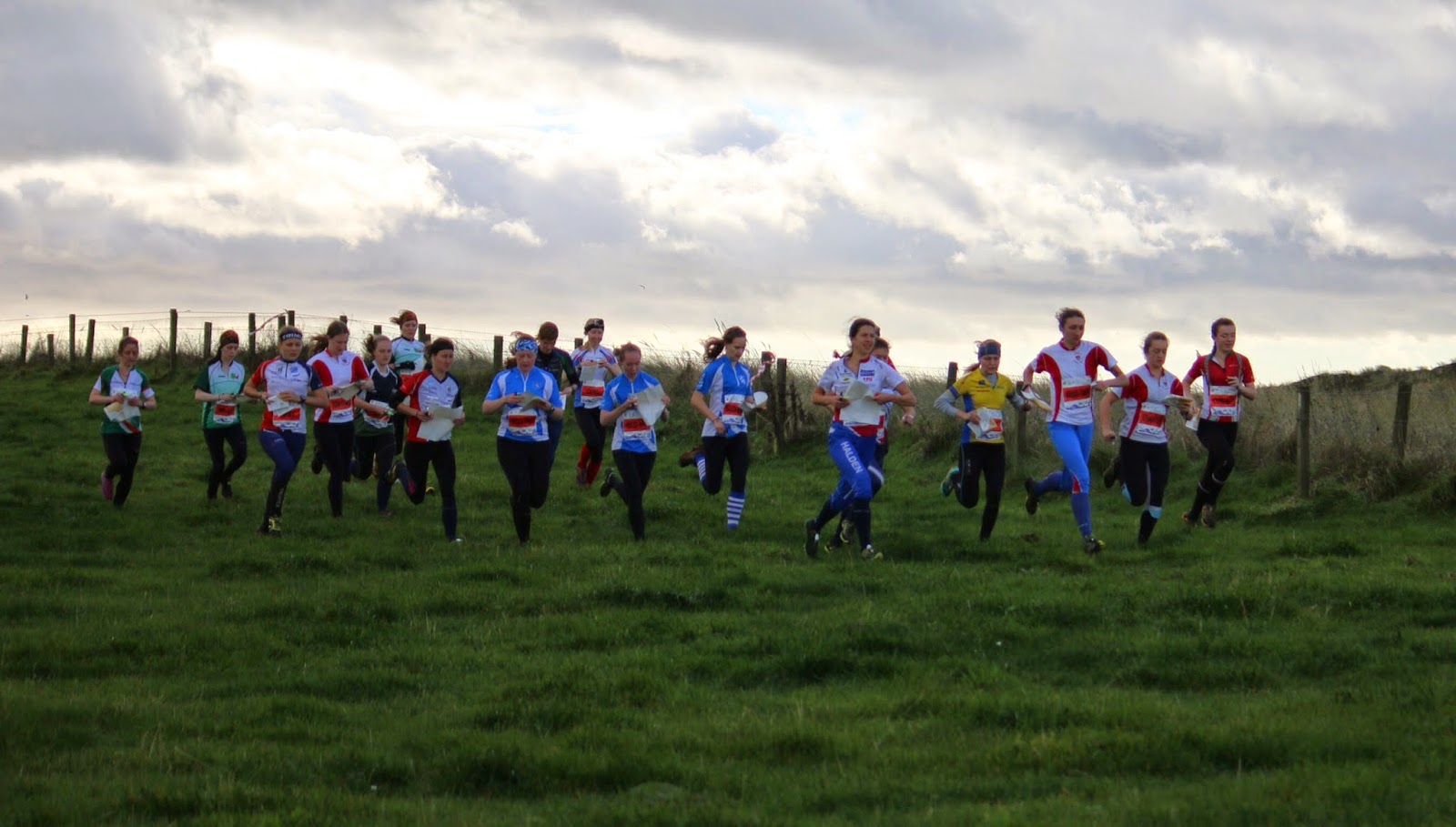 With a quick dance it was off to bed, with an early wake up the next morning to get to forvie - the sanddunes area allocated for the relay. As I had nicely drenched my top in the river the day before it wasn't that disgusting to run in the next day; but even so my levels of happiness weren't exactly high. I wanted to be in bed, resting my bruised legs instead of facing the wind, about to run against not only the best seniors in the United Kingdom and N. Ireland but also some top international athletes from Czech and Sweden. So 6.2km in sanddunes sounds okay - I enjoy sanddunes but knew the pace would be rapid so when we started at a pace I was comfortable at, sticking with the top dogs I was really happy! And the sand dunes ended up being THE TOUGHEST EVER. At one point running down them was harder than uphill as my legs got swallowed each step by the tall marram grass, marsh and heather. I made a small error in the control circle and was quickly dropped by the leading pack with the first England team, a scottish team and the rest were foreign athletes.

I ran the rest of the way with Katie and another foreign woman. Near the end I was UNBELIEVABLY TIRED, being pushed over by the terrain - luckily it was a relatively comfortable landing everytime on the soft terrain. I handed over to Bex Harding, who caught up the scottish second leg runner, meaning England were once again in positions one and two! :) the last leg runner of my team - Cat Taylor absolutely destroyed everyone and even came back before the other England team which meant a WIN for my team. YAYAYAYAYAYAYAY :) unfortunately the boys weren't as fortunate with two of the first leg runners not really loving life - some speculation about this possibly being down to the selection of attire...cough Adam Potter cough...;) 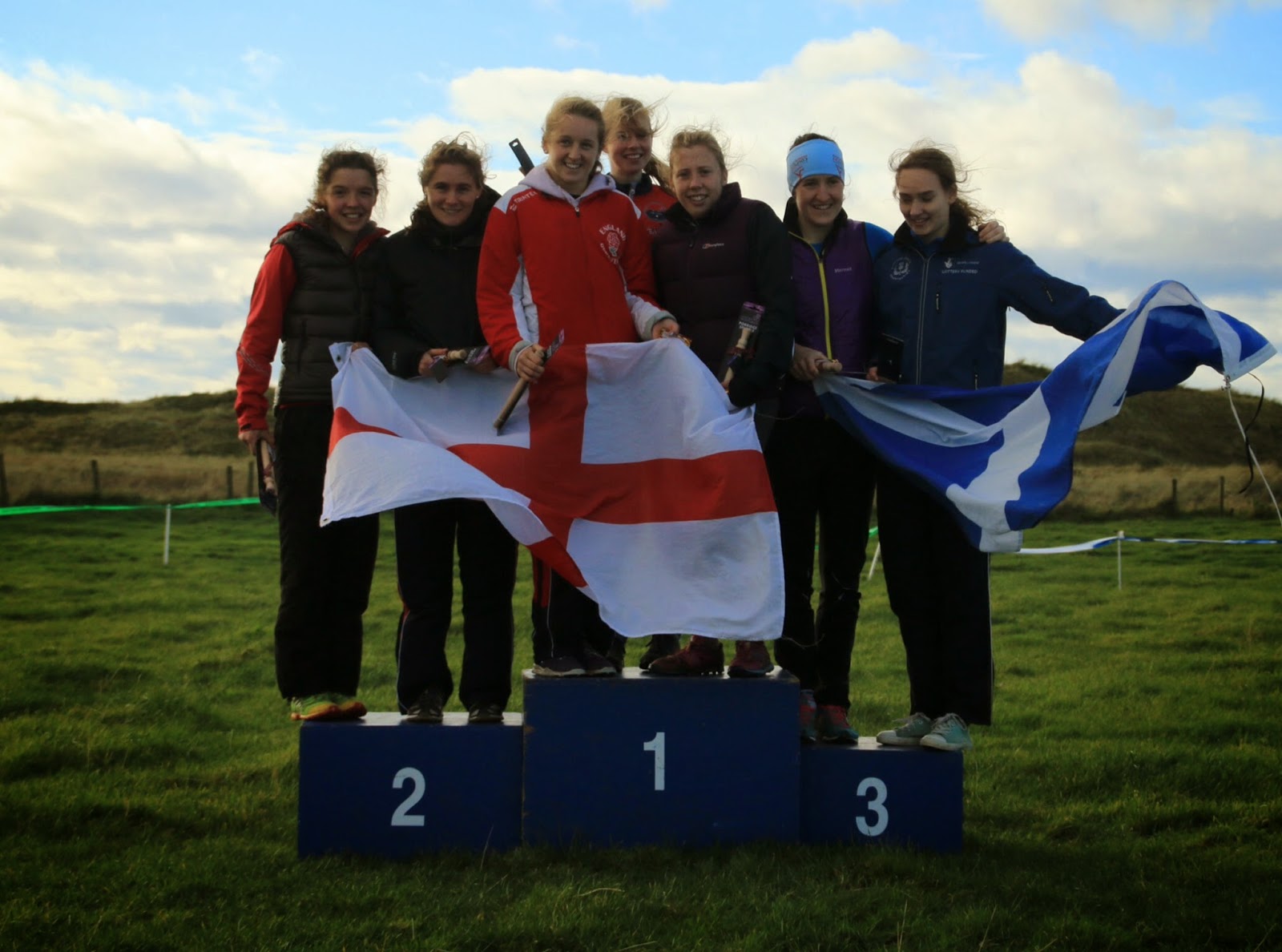 With a win, I was obviously transformed into a happy human :P and after a quick stint on the podium (where we were awarded with a scottish porridge spurtle (wooden stick which you stir porridge with!!)) we soon left - starting the six hour journey back home! The whole weekend, and the one before: collectively making the event RaceTheCastles was INCREDIBLE and I absolutely loved it! The organisation and planning was awesome and it was great to compete against some of the best without having fly off abroad!
Posted by Unknown at 06:56