With a relatively early (10am) flight to catch on the Thursday morning from Manchester airport with part of the GB team I stayed in Sheffield for the night with my BOYFRIEND (yes I have somehow managed to get myself one…) before, getting him up at 6 to drive me to the station ❤

The journey was smoother than the year before as I'd remembered my passport this time...GOOD ONE LUCY. I bought myself two meal deals with Adam and Ben to last me for the journey; we then boarded the plane which I fell asleep for the whole duration. YES :)
We met with the whole group in Brussels and travelled across to Sunparks holiday camp where I had a snooze before dinner, a meeting and then bed. 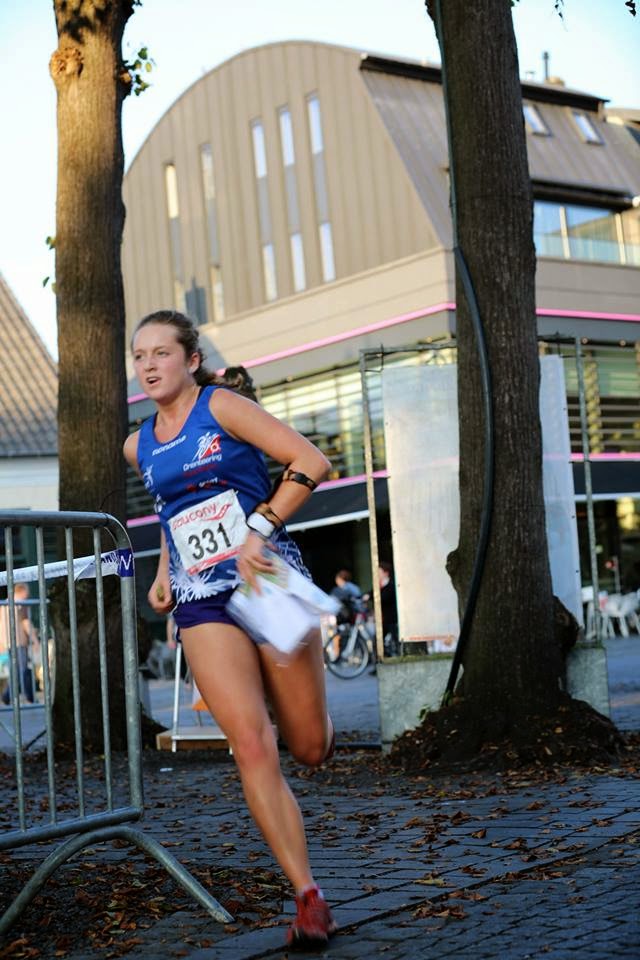 We were staying in little cabins, six per cabin so I was with the W20 girls, staying in a room with fellow Durham girl Julie Emmerson :) the beds were ridiculously comfy and we both slept every night SO WELL. Before the sprint, which was late Friday evening, we went to the model map for the long/relay. FORESTED SANDDUNES YES YES YES. I was pretty tired so only did five minutes of orienteering and then a little easy jog, knowing I was going to race hard in the evening. And that's exactly what I did...maybe a little bit too hard; I started off RAPID. Although not making a mistake it meant I died later in the course; but just about held the navigation together (it wasn't that difficult if I'm honest). I finished up in 19th, another sprint I was surprisingly happy with - second GB girl behind Tamsin Moran (a complete tank, who I hope is beginning to realise her potential :)) - although I couldn't help comparing it to how the JWOC sprint went and the complete mare I had the following day :S

Again, I slept like a log – as well as sleeping a lot in the day - planting the seed that I wasn't completely healthy and on the edge of coming down with something. However I could take a while to get up in the morning with a late start of 11.46.
Quarantine was standard banter: worriedly panicking about 30minutes before my start that I hadn't brought my top - but realising Dan had rudely stole it, thinking it was his ;) in the warm up I felt pretty tired and obviously tried not to think about this going into the start boxes with Adam. 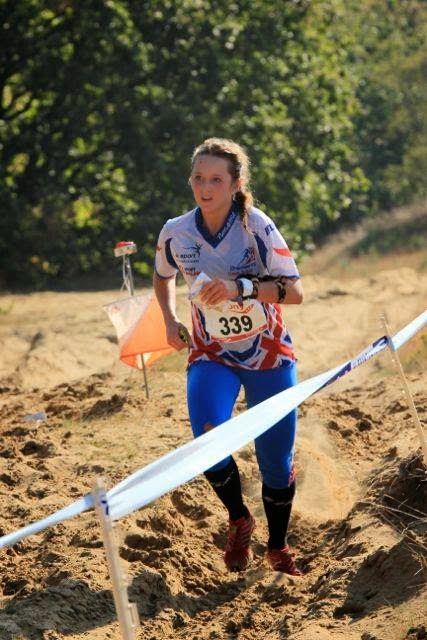 Like the sprint, I started really well, felt good and I was spiking most the controls! Knowing this was the race I really wanted to perform in, I didn't feel too overwhelmed with pressure like at Junior Worlds so I was relaxed and my orienteering was smooth :). I also started steady (or what I thought was steady) but looking at splits afterwards, realised maybe I had set off too fast as my times to the first few were rapid yayayay :D happy that the orienteering was working, I just continued at the same pace and although feeling tired wasn't worried. Although making  a mistake at four, I considered my first large mistake (out of many :/) at control eight - starting the trend for the rest of the course. I had run into the area it was in, didn’t find it and then ran off before trying to relocate and double back with my head up (although I swear the map wasn't quite right in this part...). 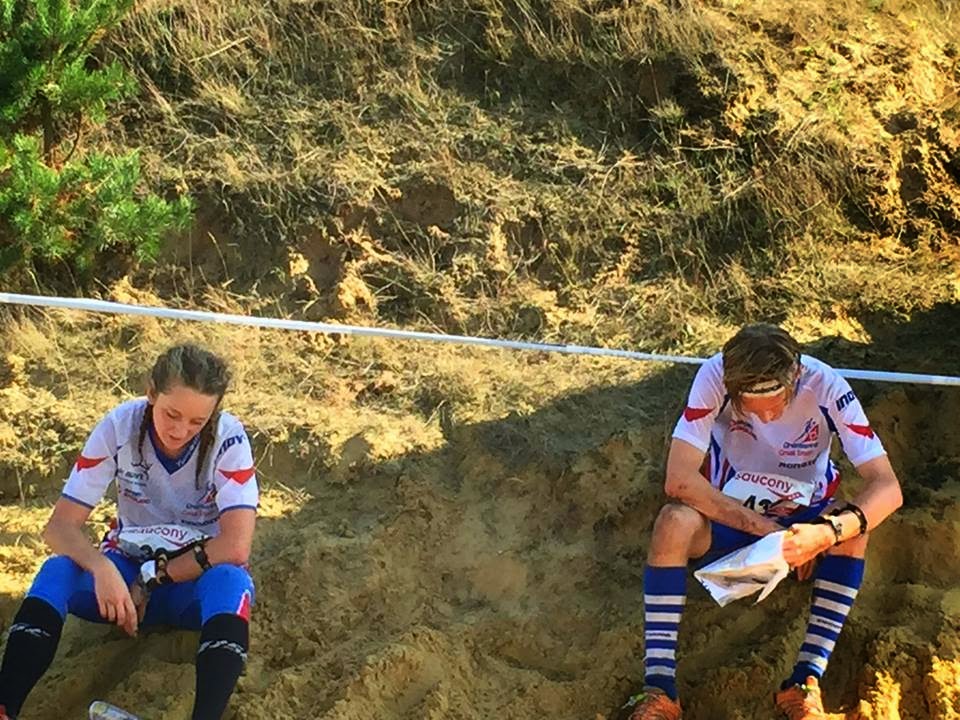 After this I was a bit flakey to the following controls, tiredness began to creep in and I still had another 20 controls to go. With patches of greatness ;) still appearing amongst a range of mistakes I made it round to the spectator control and then had ten remaining controls. In total I clocked up 14 (yes 14) minutes of mistake - I was having a great time..., with my largest mistake of four minutes at control 30; here again I was so close first time, missing it by meters but then panicking and running backwards and forwards in the vague area. With both Miri Thrane and Mathilde catching me up I knew I wasn't going to do great in the results and was resigned to that fact as I crossed the line.

Post - race phone call to my parents ended up in tears and deciding I am truly shit at orienteering and with no long distance race all summer to say otherwise; I wasn't believing my parents attempts to comfort me ❤
I stayed away from the rest of TeamGB until I knew I was going to be happy, and not force them to try and deal with a miserable Lucy. SASHA CHEPELIN THOUGH. OH MY GOD. SECOND PLACE. YES. Complete hero and I think everyone from GBR was very proud :) in the afternoon I slept again yaaaayyy, before dinner, team meeting and then the party wooohoo; although with the relay race the next day it was tame and people headed to bed pretty early. I rang my dad again which helped and although not having spoken that much over the summer about training it was so nice to still feel the love :P again, like after JWOC I was to go into the relay for enjoyment - realising I run best when happy :)

In a strong relay team with Tamsin and Florence, I was confident before that we had the possibility of finally getting a decent relay result. I was last leg, which although I would have preferred first for reasons mentioned in previous blog entries, it was what was best for the team. Tamsin started well, sticking with the pack, although knackered from the previous days; although warming up now, I was told Florence came through spectator also with the group - the other two GB teams just ahead. Going into the box, waiting to hand over, I watched the two GB girls from the teams just ahead come through. But then unfortunately Florence had made a mistake in the final loop and came in some minutes down, setting me off with the rapid French girl: Lauriane Beauvisage.

Although I am aware I was running with basically no pressure, I had a FLYING first part of the course. I was literally rapid - call me cocky but it was amazing. I mean I was amazing hahahah. I felt good, the French girl wasn't running away from me (instead I was leading her); then we got to spectator control and in the last loop I did the same as Florence, making some mistakes and losing some places. Again I was running perfect most of the way to the controls, losing confidence when not finding it straight away and running around instead of just STOPPING AND RELOCATING. Naughty naughty; very bad technique. Need to work on this.

Our best GB team came 5th WOOOOOOP WWWOOOOP. Which must be the best in relays we have done in a while! Although they were unlucky, missing out on the podium I think honestly I would have been bummed (as well as happy for them obviously), mostly because I am a jealous bitch and would have wanted it for my team! :/

Post relay we went back to the accommodation, with hours to spare for a quick swim and time to pack before starting the journey home. With copious amounts of pizza and garlic bread and some great chat with Adam and Joe in the plane to Manchester, I hadn't had ANY sleep during the day :O so crashed when I finally arrived at Jack Benham's who is at Manchester Uni :) good weekend, yes - didn't do as well as I wanted but technically I was seeing some positives and knew what the weaknesses were, unlike with Junior Worlds. Again thanks to the coaches that helped: Jackie Newton, Mark Saunders, Alice Bedwell and my parents - again; they are the ones that get me through ❤
Posted by Unknown at 12:20