Exams have started :( Had my first exam today, have six in total so to ‘celebrate’ getting through my first exam Peter, Pippa Archer and I traveled to the North York Moors for my FIRST EVER FELL RACE. It was an Esk Valley Fell Race: The Carlton Challenge. I was told it was quite a nice course and the weather cleared up for when we started running making it really pleasant. It was a little chilly but not thermal weather (had to tell peter to man up and not wear his :P) Had no idea how it would go, little nervous but excited and tried to suss out the people I wanted to beat on the start line from what they were wearing :P The first 4km was pretty much all downhill and after some heavy rainfall it was a bit slippy in places (had opted not for my Orocs as I was told the 4km back up the hill was flagstones :(). 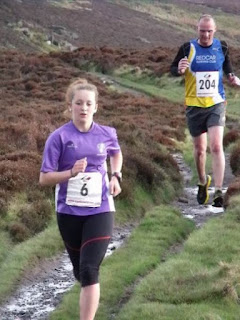 STILL LOVED IT…felt rapid!!  Roughly half way along the course turned back on itself and the ascent began. For the first part I was pretty slow and some people (mostly old people!!) overtook me…however after about 5km onwards I was feeling better again and even though it was still uphill I could pick up the pace :D There was a woman slightly ahead of me who I was slowly catching and the last part of the race was a pretty steep drop down to the finish from the trig point. As soon as the short descent through terrain started I’d cut the distance between us by half and (although a tiny bit conscious about my ankles) decided not to hold back and caught the woman up, beating her to the finish…felt sooo uncontrolled and like I was going to face plant at any moment. Also took a guy at the finish who I don’t think was best pleased. HAH.

It was 5miles (so on my Garmin got 8km) in 43.29…not tooo shabby. There was a little wait before the prize giving (Peter had won!!! And I’d won U23 and came 2nd in the Women) which was definitely worth the wait!! THREE BOTTLES OF WINE! YEAAHHH BUDDYY!! Entry was only £6 so £2 a bottle is a bargain! Definitely going to be doing a few more of these…planning on doing another Esk Valley race on the 30th of May :D Absolutely loved the race and think I am beginning to overcome my mental hatred for hills :D

Results can be found here: http://www.eskvalleyfellclub.org/results/fell/nehra/Carlton%20Cha llenge%2015-May-2013.pdf
Posted by Unknown at 14:10