FIRST ORIENTEERING OF THE NEW YEAR. And I’d already decided it was going to be a good year, and what a weekend to start it off!
It was a slightly longer than the normal GB weekends, and was in Aldershot, The SOUTH, so it was bound to be an awesome weekend ;) haaa, so things kicked off with some night sprinting Friday evening where Charlotte Watson (fellow team mate, who’s been on shed loads of tours and event with me, so a lot of love there) and Katie Reynolds (complete welsh babe ;)) went round together. This ended badly, with the training turning into a MASSIVE GOSSIP and needing regular relocation! However it was good to enjoy the company, and familiarise ourselves with sprint orienteering techniques again!

A word of warning: The food on these trips is INCREDIBLE! I would just go on these for the food…it is STUNNING :D So Thursday night was no exception with so much food...I couldn't help but go up for seconds of practically everything :P Anyway, so Thursday was the travelling day, with everyone arriving and chilling out before the proper training started on Friday, Saturday and Sunday. Highlight on the Friday was having an extended lunch with Katie and I going a bit crazy in the playground...wishing we were five again ;) 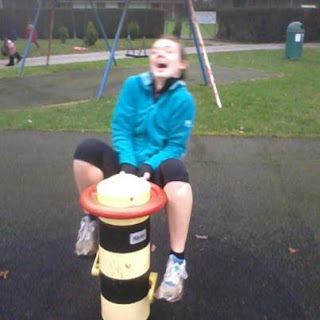 The training was really, really structured with a massive variety on offer with the help from local clubs J On Saturday morning we had a forest sprint…ONE OF THE TOUGHEST THINGS!! I was useless at it…trying to run at sprint pace, through terrain, up hills and across ditches I found, practically impossible!! I died even before half way round, getting caught up by numerous people and losing a decent flow and structure to my navigation! I was glad for it to end and decided to stick with forest orienteering OR sprint orienteering…not mixing them (my head and body couldn’t cope!). That evening we had a drill session, talk and question and answer time with Mike East, an ex-Olympic athlete who’s talk was really useful, especially helping understand a competition at an incredibly high standard and the differences between a sport with more support than orienteering!

Sunday, we had a structured Qualifier and Final Sprint Course which was a good way to end the weekend and there was A LOT of positive feedback from all the Squad athletes!! Even though it was sprint training I was still reaching 10-15km a day from each small course/exercise being further than stated due to having to run around houses. It was an intense weekend, as it was high quality, fast orienteering but in quite a vast quantity so my calves became INCREDIBLY TIGHT (they are very temperamental…getting tight randomly even after days of rest) so I was constantly monitoring, stretching and massaging them to reduce the impact on my shins!
Posted by Unknown at 15:08