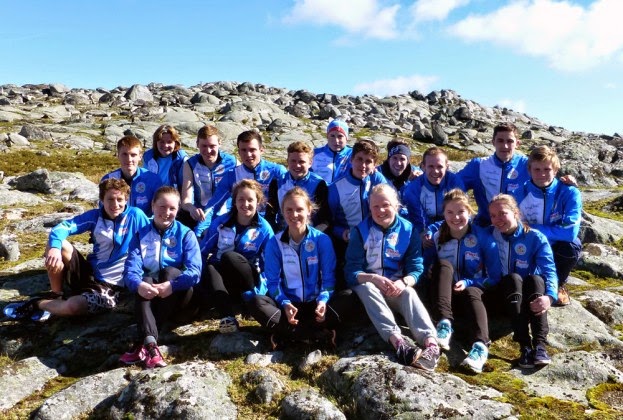 The year before I had travelled to Portugal with the GB squad for an orienteering event which was good but not amazing. This year however I went with Lillomarka and I had so so much fun!! I travelled down to Stansted with Kris Jones and Joe Woodley as the flights from here were a lot cheaper. We arrived into Lisbon, and  after a bit or issues with the car hire we travelled to our accommodation which even though asked by many people where abouts in Portugal I went I am still not too sure....Coruche maybe...no clue. Very bad I know.

Anyway, next day we were up bright and early for training. Travelled twenty minutes tops and arrived at this beaut area- open, sandy forests. We had some long training there which was lovely as a warm up back into orienteering and IT WAS HOT!!!!  Although the terrain was lush, for the first couple of trainings I was feeling pretty lethargic but after the rest of the team arrived and we did some faster relay training I felt a bit more like a runner and not just a little troll bashing through the woods. So I just bumbled around the course, already feeling tired but just from the travel the day before.

So anyway training carried on being awesome, racking up some great distances in the mileage ;), I was in a room with Helen and Rina  who was joining us even though not part of Lillomarka and was just getting back into training after breaking her coxikz - I know this spelling is poor but I feel phonetically it is ideal.  That evening we had some 'bonding' where Helen and myself quickly made a game up which actually didn't turn out to be that much of a fail with us having to get into partners and tell the other as much about ourselves before the group gets to test the opponent, asking any question they like. I was paired with Helmut who had a memory like a sieve- typical boy really ;)- answering the easiest question (given to us possibly out of pity as we were losing badly) of 'How many siblings does Lucy have?" incorrectly too.  COMPLETE RETARD

Whilst at this accomodation, Helen decided she’d found me a perfect man who had a 'Cute smile' and worked at the place where we ate - not sure if I can call it a restaurant? However we never talked so those dreams quickly faded ;)

We trained in Evora for a sprint- turned out to be more like a bloody urban race but it was decent to get some fast threshold training in :) took us a while to find a supermarket, Gaute took us for a drive right around the whole town before. We also did some sick ass training on the moon...and it was Joe’s birthday, however this was near the end of the week so it was more of a training walk for me. Very rocky and I didn't want to injure myself. The other training we did included some relay stuff which was AWESOME! The first relay area was a nightmare though and my legs go so scratched up...i fell in multiple piles of brambles, but the following relay training was sick.

In between trainings I was working and we seemed to spend a lot of time in supermarket car parks - mostly eating rice crackers with chocolate on which I was told was cancelling out the goodness of the rice crackers or trying to learn Norwegian from Ingvild! Pretty soon it was time to fly back for BUCS orienteering but not after a birthday celebration for Joe and myself with some interesting party games AND CAKE! The way home was pretty traumatic with Kris having to go to the hospital at 5am but me and joe managed to make it in time for our flight...in my birthday -14hours of travelling was NOT FUN but it was helped with copious amounts of chocolate and a chocolate cake meeting me at Florence's house when I got to Ilkley <3