Adventures in Belgium with our bikes...

Three days after the JK, the Butt Squad were off on another adventure…to ride in the Ronde Van Vlaanderen (Tour Of Flanders) Sportif. On Thursday evening Chris collected Adam and I on board his renovated van. SO much nicer than dads van with cute fairy lights, curtain, homemade shelves and plenty of space for four bikes. We picked up Tom Stubbs and continued to Dover meeting the rest of the gang where we stayed in a B&B with £3 breakfast the next morning J Shared a room with Adam & Harry the two vainest people I've met <3 Couldn't resist sharing this photo with the world :').


Friday was spent waiting for the ferry (where I learnt how to change a tyre!! Credits to Chris and his van having borderline illegal tread) ,on the ferry (entertained by Sudokus) and in the vehicles in convey travelling to Oudenaard to register for the race and pick up the timing chip, map but more importantly the free t-shirt & medal. I was getting a little bit grumpy with the long travelling so we made it to a supermarket to collect suppliers. We travelled back up to Brugge, scoffing ham and cheese (or camembert and chorizo in our vans case) along the way.

Before the early 6.30am wake up the next day, we sorted out the bikes and transport before a much needed sleep. We dropped the boys off in Brugge the next morning for them to start the Long distance (227km). Mum and I were driving Chris’s van, successfully manouvering it across lanes & dodging cyclists/cars as we took some time to get used to driving on the ‘wrong’ side of the road! The medium (129km) and short (71km) both started from the same point in Oudenaarde and all three routes ended in the same place. Dad, Tom, Jamie and I were set to do the middle (I was hesitant about this right up to the start line, previously entered onto the short but decided to ‘make the most of my money’ and commited to the middle). Alice & Mum were riding the short which was the same as the last 70km of the middle & long.

We finally set off around 8.45am (after me forgetting gloves & Jamie forgetting to fill up his water bottles!!) and came to the first climb about 10km. Dads chain slipped off half way up, fell off and stopped a few people. We put it back on and then I gave him a little push to get him on his way – as I was wearing trainers (and not cleats) it was a lot easily for me to get back on! My chain also clunked off further up the hill and so it was a slow start to the route! Unfortunately it didn’t get any quicker…dads chain slipped off on the next two, meaning he was battered from falling and had no confidence in his bike. My chain came off about double the number dad’s did but I was riding a 10year old, 3rd hand Giant which I expected to have problems so wasn’t as frustrated.

20km in and dad was grumbling about quiting – with 100km to go it wasn’t a great sign but we perservered until the food stop to shove waffles and energy bars in our faces and hope Dad would feel a bit better. However with the cobbled hills becoming frequent dad was forced to walk up every hill which meant Tom, Jamie & I a wait around at the top of each one. We grumbled around until the half way food station with no signs of Dad getting any happier, it was also getting really chilly to stop so often L The koppenberg was the next climb where we were all forced to walk as it was a pinchpoint and in the mass of people you couldn’t get through. A bit annoying as I would have liked to give it a try. We got to the top of Koppenberg when Dad had had enough and was going to throw in the towel (or Dad’s bike into a bush!). We had a little team meeting and with some persuasion convinced Dad to carry on with me letting Tom & Jamie go on. This meant we weren’t worrying about slowing them down and could just spend the rest of the day to finish it – and we really did.

In total it took Dad & I 8 and a half hours to cycle 129km. A ridiculously slow time but we finished and could even smile at the end J I think it was because we grumbled so much on the ride - putting the world to rights and hating on all the arrogant cyclist who rudely shout at you because you are cycling sloer than them :(.

So glad I decided to do the medium  as I was the furthest I’ve ever cycled by 50km (!) and it meant Dad got round too!! The time included stops which probably took up an hour at least – at one point, where dad didn’t see me overtake on the hill and then thinking I had crashed behind him, we took about 20 minutes to find each other – at which point, when we did find each other, I had a little sob thinking I’d been left and was all alone L. 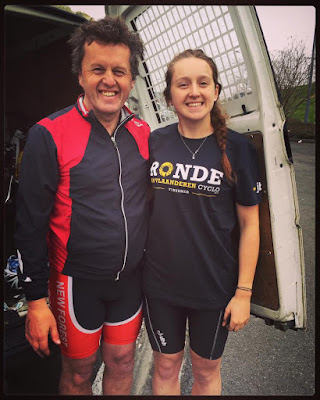 At the end my legs weren’t feeling too jelly like but my hands were SO painful – I felt like I had arthritis from the cobbles as my hands were knocked about so much. After each cobbled section it would take about five minutes before I could straighten my fingers as I was holding them as tight as possible to the handlebars to stop my bones knocking around! At one point I had to stop and walk as it was too painful to cycle!

The boys doing the long (Chris, Tom S, Harry & Adam) finished only minutes after dad & I ( a bit depressing really) but with everyone in safely and happy we trooped into town for a beer or two and some pizza. The beer glasses were especially made for the weekend with cobbled bottoms so we couldn’t help but tactfully take a few for memorabilia. At the pizza place we all tried to pay with our loose change – in the end the wonderful pizza man took the change (even though it wasn’t enough!) and told us not to worry J.

Unfortunately the night was a bit longer than expected as about 200metres into the journey home the van’s clutch got stuck so we couldn’t change gear. After some doom & gloom and negativity (not surprising as we were all knackered) Chris saved the day by driving the van home without a clutch! When all finally at home we had some celebratory prosecco, a little medal ceremony and a bath before bed! The next morning I travelled home with Chris & Tom S, while the others stayed in Belgium to watch the pros cycle as they took the Monday off work to travel back. Wonderfully tiring weekend and already looking forward to the next Butt Squad Adventure.
Posted by Unknown at 12:56