WHERE DO I START? This was such a good weekend and probably a big blog…BE PREPARED. Right so,  I remember first thinking of wanting to do some more relay practice in late Autumn of last year and after speaking to some other girls in the GB squad (Florence, Charlotte and Zoe) we all decided to sort our shizz out and focus a bit more on the relay. The Danish Spring Cup looked promising with the Saturday being a Middle distance chase (something none of us had never done…spending a while browsing over the final details trying to make sense of the map changes/passage run throughs) and on the Sunday a standard relay (we decided to miss the first part of the relay which was Saturday night saving ourselves from freezing to death :P) so Florence, Charlotte and Me trekked across to Denmark for this event. 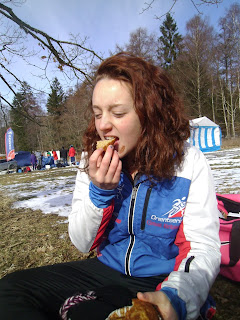 SO anyway, we all met at Manchester airport, flying to Copenhagen where my organisational skills came into play (NOT) and we tried to make sense of the trains and the ’zones’ having to punch our tickets in funny yellow boxes. I still have no idea if we did it right but no-one came round checking so we were lucky ;) After arriving in Hillerod, we found our accommodation relatively easy and tucked into our pre-made dinner…pasta and then Florence surprised us with THE NICESTS DATES EVER…so our thanks go out to Florence’s mum for buying them ;) haa and by 8pm we’d settled down and were in bed!!
Included in our hotel price was breakfast, so taking full advantage of this we took AS MUCH FOOD AS POSSIBLE for our lunch on Saturday…smuggling out our sandwiches wrapped in napkins we packed, caught the train (feeling very ignorant of the language as I tried to pronounce Marum with the WORST accent ever…the train steward looking at me like I was a complete fool) and walked to the event arena arriving with about 3 hours to spare :P originally we were going to do some training but sacked that off, lazing around…Florence and Charlotte read despite my efforts to annoy them so I amused myself by eating (of course) all my lunch.  Even though we were wearing all our clothes looking ridiculously obese, we were still freezing so went into the food tent to keep warm where we spied on Emma Klingenburg (multiple gold medalist...bit of a hero etc etc) who was buying food, hoping that she would buy cake... AND SHE DID :D woooh...making us feel so much better about eating so much crap! 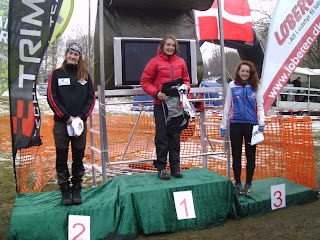 The race, was incredibly exciting, with SO MANY gaffles!! It must have taken years to plan, making it so hard to tell where about you were in the forest...seeing people randomly join your gaffle before veering off in a 90degree difference to my course! Managing the map change over fine, I started the second half feeling SO DRAINED trying to hang on to Cecilie Friberg  who was absolutely rapid (but felt better, after finding out it was her home terrain :P). Only after finishing, to my surprise, did I work out I’d come back in third, followed soon by Charlotte in 5th and Florence (who has been out of training for a good month from injury LL) in 9th. We were all really pleased…having no idea of how well we would do, rewarding ourselves with hot food and cake (IF YOU HAVEN’T GATHERED WE LIKE FOOD). Later, walking back to our accommodation we saw a RED SQUIRREL!! The first time me and Florence have seen a wild one…Charlotte was appalled :P So after an eventful day, Charlotte collapsed to bed at about 5pm (YES 5PM…complete slacker, bless :P) and that evening we found a Grill House in Hillerod, so all tucked into incredibly cheap, excellent, nutritional post-race food of burgers, chicken, falafel (Charlotte is vegetarian, to mine and Florence’s dismay ;)) bread and fries :D. 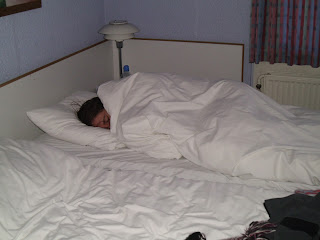 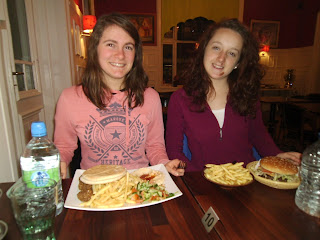 Sunday morning we were all a bit daunted by some of the senior teams but persevered when Charlotte (THE COMPLETE LEGEND) coming back, after 1st leg in 1st by 6 minutes. WAAAHH!! Although so excited…I was thinking, ‘WHAT THE HELL? What if I go out in first and lose it and everyone hates me!!’ Haaah (I think I’m psychic :P)…Florence powered through spectator still in the lead, and after finding out I needed to wear Tractrac panicked to put that on before she finished the final loop.
Then it was my turn, knowing I still had a 2 minutes lead I was aware of how ‘flukey and risky’ my orienteering feels so consciously chose a fair few track legs that were safe. About half way round…after pacing the first half at sub 5m/ks I was KNACKERED and my navigation paid, so I lost time on the middle control pick. There was then a last long leg, which I took the long safe route round the green saw Ita Klingenburg punching the control ahead of me. For a good few minutes my brain kept trying to convince me it wasn’t her, just someone else who happened to be doing the same part of the course but running through the spectator control I knew she’d caught me and I had to get closer to her with a chance of bringing it home. However THIS DID NOT HAPPEN…the last loop was exhausting and I hardly looked at my map trying hard to shorten the distance between us but at the run-in and with a home-crowd she was too far ahead to catch. Gutted but also OVER THE MOON that we’d come second, knowing we’d all run so hard we remained positive. Shortly after finishing, we had to quickly pack up and rush off to the station ensuring we’d get our flight back in time, all a bit shocked that the weekend was over as well as a huge success, sharing the knowledge that this was exactly what we needed to help our relay racing and confidence.  From all of us, THANK YOU so much to the organisers, other athletes, supporters and friends who helped out and made the trip A MASSIVE ACCOMPLISHMENT. 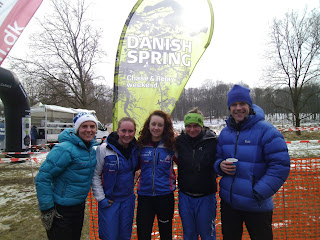 Results, routes from TracTrac and news can be found on the homepage at: http://www.danishspring.dk/results_2013/
Posted by Unknown at 15:46

Email ThisBlogThis!Share to TwitterShare to FacebookShare to Pinterest
Location: Denmark